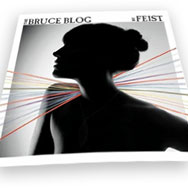 Feist released Reminder back in May and it still popular. Â She released her latest singleÂ “Feel It All”Â from the album earlier this week. Â Not only is it a good album, but the videos for the songs off it are great. Â All are done with director Patrick Daughters and also done in single shots. Â You probably have seen a portion of the video for 1,2,3,4 on the Ipod mini commercials. Â Even when she was on the late night shows she tried to do some cool things. Â Here is the video plus some other ones that I found after the jump.
Video for My Moon ManÂ Video for 1,2,3,4Â Video of her on Jimmy KimmelÂ Video of her on LettermenÂ