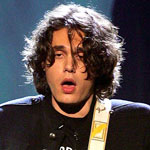 John Mayer’s like-ability factor goes fluctuates a lot. He does things that make me hate him like creating crappy adult contemporary songs, doing great blues stuff to get cred while still pumping out adult contemporary songs, and then theres the dating of Jessica Simpson. He gets points for actually being good at blues and every once in a while using it, being mostly entertaining whenever I have seen him interviewed, and being friends with people like Eric Clapton and Buddy Guy. Though the real question is if he is ejaculating or crapping when he makes faces like the one above.
Anyways, I guess he also thinks that he is very entertaining. He has tried his hand at standup a few times, and apparently they didn’t go all that bad. He also convinced VH1 to give him a show. Here is a highlight that upped his stock in my book: