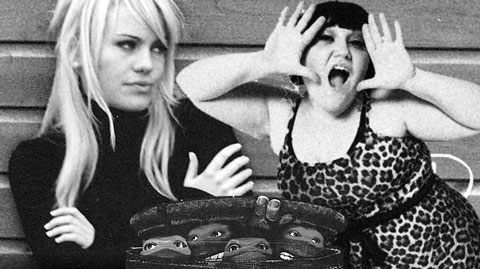 With Amy Winehouse going bat-shit crazy, the record companies seem to be trying to capitalize on this retro sound that is getting attention. Sharon Jones did it, but it the cd did not sell that well. XRT have been playing this new song called “Mercy”, that has this retro sound to it. The singer sounds a lot like Beth Ditto from the Gossip, a great band well worth a listen. Still not sure why they are not being played in the US, but oh well.
Anyways, “Mercy” is not The Gossip, its a singer from England called Duffy. She is getting a lot of attention lately, and rightly so, because she has got a great voice. The songs are ok, but I think the reason that I enjoy “Mercy” so much is because it reminds me of the Teenage Mutant Ninja Turtles Movie. The bass in the background of the song reminds of some part in the movie where either Danny is talking to Splinter or the Foot are sneaking up on April. I just can’t figure it out.
Hopefully I am not crazy and making this up. But if I don’t figure this out by the end of the day I am going to have to steal the Travers Family VHS copy of Teenage Mutant Ninja Turtles.
Check out Beth Ditto and her band, The Gossip, at Hype Machine or their myspace.
Check out Duffy at Hypemachine or at her myspace.
If you only read this for the TMNT content, check out this video of mistakes made in the movie.