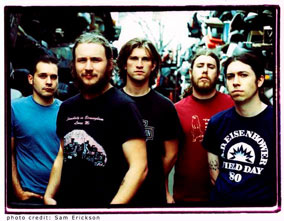 Its hard to tell if a band is extremely popular or just the latest “indie darlings” of the interweb. Take My Morning Jacket. They are one of the major bands to play Lollapalooza this year and last year, their last album was on top of many critic’s “best of the year” lists, and they just played Saturday Night Live. But at the same time, with the exception of a few people, no one I know has heard of the band let alone knows that they have a new album coming out.

Well if you haven’t heard of them before, hear them. Their previous album ,”Z,” is a great album start to finish and the new album, “Evil Urges,” is good too. “Evil Urges” comes out early June, but you can find leaked songs over the net. Check out their myspace or Hype Machine. And if you go to HypeMachine, listen to their cover of Tyrone by Ericka Badu they did at Coachella. And if you haven’t heard the song Tyrone before, check out the video after the jump.
Thats right, I am posting a video of Ericka Badu on a post about My Morning Jacket.