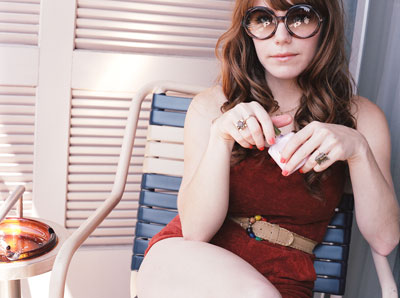 This is a post dedicated to Kevin, who hasn’t given Jenny Lewis a chance because he didn’t like the girl who originally recommended it to him.Â  Jenny was child actress who had parts in Baywatch, Golden Girls, Growing Pains, Roseanne, Mr. Belvedere, Troop Beverly Hills, Foxfire, The Wizard, and Pleasantville.Â  She is also a great musician and has worked on many projects.Â  She has done projects with Postal Service, Elvis Costello, Conor Oberst, a full cd with the Watson Twins, and a succesful side project called Rilo Kiley.Â  Last year, Rilo Kiley’s cd, “Under the Blacklight,” was on a lot of year end top-ten lists.Â  The band consists of another child star, Blake Sennet, who you might remember from Salute Your Shorts or Boy Meets World.

The point is, she a great musician worth a listen on any of her projects.Â  Her new cd, Acid Tongue, is getting a lot of attention on these top-ten-of-the-year lists this year.Â  Her country-rock sound is very derivative of the influences that are on her wikipedia page.Â  Check her out on myspace or on hype machine.Â  After the jump check out the video of a song her performing a song off of Acid Tongue on Letterman with Elvis Costello.