New Hot Shit For Ya’ll To Vibe With 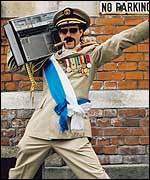 Using the excuse of being a dj for grade school dances, I like to occasionally listen to KissFM.Â  It’s a convenient excuse when your manhood’s in question for having C’est La Vie (or say levie when spelled/texted by a drunk Kelly) by B*Witched on your ipod.Â  Having just dj-ed a grade school father-daughter dance party last weekend, I thought it would be fun/appropriate to have a post about what the kids are listening to.

Taylor Swift is by far the crowd favorite.Â  Every other request was for a different song by her.Â  You know when you are getting older when you and everyone around you has almost no clue who the fuck the best selling artist of previous year was.Â  “Isn’t she one of those American Idol girls?” “Shes gotta be one of those Disney Channel singers.” Nope.

Other popular requests at a Catholic grade school dance include songs that aren’t appropriate at Catholic grade schools.Â  For a long time, songs like Big Butts and Shake ya Ass have not been able to be played at the schools for their obvious and raunchy lyrics while songs like Get Low and Crank That fly underneath the radar due to either being rapped too quickly for teachers to understand, using slang like “skeet skeet” or “superman that ho” (or “laffy taffy”) that no white person over 20 knows without internet research, or just that its the radio edit.Â  Some of the new songs obviously can’t be played even when you have the radio edit:Â  Ludacris has a song with the chorus saying “If I take one more drink, I’m gon’ end up fucking you.”Â  All American Rejects have a song with the chorus that goes “I hope it gives you hell” and says damn a lot. 3Oh!3 have a songs that are hilarious and raunchy yet aren’t popular enough to have radio edits for lyrics like “tell your boyfriend if he’s got beef, that I’m a vegetarian and I ain’t fucking scared of him.”

Here are my favorites that were played at the recent dance:Â  Lady Gaga‘s Just Dance has been around for awhile and is now getting some other songs on her disc some radio play.Â  Good songs if you don’t mind bad lyrics.Â  Flo-Rida has a new song with some signer called Kesha (doing her best Katy Perry impression) that most kids don’t know is basically a cover.Â  I can’t decide if I like T.I. or not, but radio has played his songs so many times that I now find myself enjoying Whatever You Like and Live Your Life.Â  This stupid song by V.I.C. has been stuck in my head for whatever reason.Â  Lil Wayne can get annoying, can’t deny that he can be pretty clever with songs like Ms. Officer, A Milli, or La La.