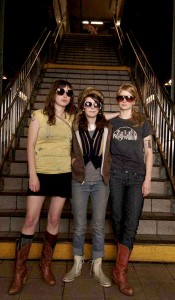 There are a couple great sites get bands to come in and record live/acoustic/whatever versions for their site particularly. The good ones that I know of are Daytrotter, Black Cab Sessions, and The Take-A-Way Shows.Â  I recently discovered Hear Ya (from Shh…cago by the way) because of two bands that are worth a post.

Those Darlins, who I mentioned before, are getting more and more recognition these days.Â  Just this morning I noticed they got a shout out in the Chicago Tribune talking about SXSW “We’re virgins to South by Southwest, but we’re going to slut it up all week.”Â  Its that attitude that is presented in their twangy, country-rock-ish songs.Â  They don’t have a proper cd out, just a single (Wild One), so I was excited when I saw that they did a few more songs over at Hear Ya sessions.Â  “The Whole Damn Thing” is the best one. PS. I guess they also did a Daytrotter session.

The other band I wanted to mention was The Heartless Bastards.Â  Their last album was good, and many blog nerds have been eagerly awaiting this next album, The Mountain.Â  But after hearing the album, many seem to have the same response:Â  The music is solid, but the real reason to love this band is the undeniable voice of their lead singer, Erika Wennerstrom.Â  Check out the songs they did for Hear Ya.Â  PS. HB also have a daytrotter session.