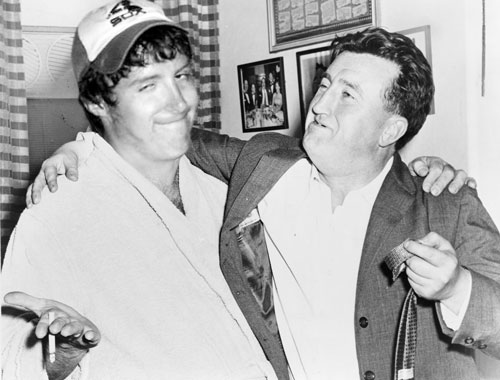 A while ago, Austin showed me the Writers Almanac, which is Garrison Keillor reading some some and noting that date/week in literary history. The other day I found a little less literary, little more hilarious podcast called The Dead Authors Podcast which is Paul F. Tompkins as H.G. Wells interviewing other comedians as dead authors.  After a few listens, it seems some of the comedians only read the author’s wikipedia page, but still can be pretty funny.  The last one I listened to was Brian Stack (who I only know from Late Night with Conan O’Brien) pretending to be Irish writer Brendan Behan.  After reading more about him, I started listening to the many versions of the Auld Triangle, which was written his brother Dominick for his play, The Quare Fellow.

That long exposition is just to show this clip of Justin Timberlake, from the Coen Brother’s Inside Llewyn Davis, singing the song with Marcus Mumford and guys from the Punch Brothers. It seems like another impressive T-Bone Burnett soundtrack that you can stream on NPR, but here is the song: