Via Pop Candy, a website called Slashfood picked the best sandwiches in the US. Lo and behold, Chicago got a couple of mentions.

Al’s Beef is on that list.Â  This is one of those Chicago institutions that is known probably as well as Giordano’s Pizza or Navy Pier, but Slashfood brought it up and I have been feinding that thinly sliced goodness for a couple of weeks.Â  The location closest to the Travers house had a promotion giving away 50 certificates granting a free beef every week for a year, and we got two of them.Â  Every Monday was free beefs for me and Joan. Â  They have been closed for three weeks (the cause might be too many free beefs) and I need my fix. 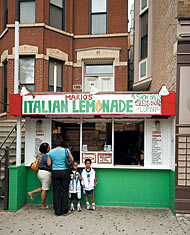 Not feinding enough to get off my lazy ass and go to the original location in Little Italy.Â  Why I mention it and what makes the location so great, besides being the original, is that after you get a sandwich, there is Mario’s Italian Ice across the street for dessert.Â  I have heard stories about how it is a mob front or has some sort of mob connections, but that just adds to the allure of the place.Â  Kinda like the rumor that Demon Dogs used to steal their electricity from the El tracks above them:Â  Great story but greater food.