In case you haven’t noticed… we’re not firemen 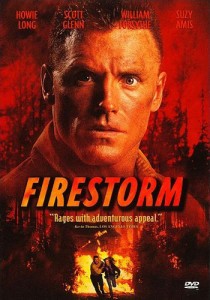 Right now, I have 75 or so movies on the Netflix queue, so trying to decide what I want to come to me next gets difficult. There is about 10-15 that I have had on their since I originally got the service and I will probably never get to. But the ones that I get most excited about and get bumped up are usually the awesomely bad movies. I know I’ve never seen The Bridge Over The River Kwai, but it was put on hold so I could see Youngblood, with Rob Lowe as hockey player named Dean Youngblood trying to make it in the minor leagues with the help of Patrick Swayze. It barely made a release as a DVD, but was first on my list to watch.
Same is the case with Firestorm. Joan is the one that found out about this, and thank god. I don’t know how I could go through life having not seen Howie Long as firejumper Jesse Graves.Â  It seems like the makers thought it would be a decent movie, they spent the money on actors like William Forsythe (great character actor from Raising Arizona, The Rock and Dick Tracy) and Scott Glenn (Axe from Backdraft).Â  But when watching it, Kelly’s superiour knowledge of crappy movies helped her figure out the plot in the first ten minutes and confirm how awesomely bad this movie really was.Â Â  So if your the type of person that enjoys movies like 4 Brothers or The Marine, I would give Firestorm a watch. (I was going to change the picture of Howie’s face to Neil’s, but that confused look is too good to change)

And if you have free time, but not enough to be watching whole crappy movies, you can watch good shorts: here is a site with some short nifty videos, and here are the animated shorts that were nominated for this past year’s oscars.