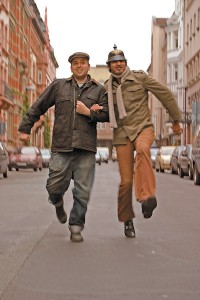 Among many other things, I am a sucker for strip down rock ‘n’ roll, kick-drum,snare,kick-drum,snare drum beats and raw R&B/soul sounding music.Â  Hopefully that made sense.Â  The point is that King Kahn & BBQ Show is all of that.Â  They are just two dudes.Â  When they perform live, one plays guitar and sings and the other plays the high-hat, bass drum, guitar, and also sings.Â  Their name has gotten around a lot since The Black Lips, another awesome band, sited KK&BBQS as one of their favorite bands.Â  King Kahn recently did a video for Pitchfork interviewing a inspiration of his: The Mighty Hannibal.Â  I found the video through a site called The Sailor Jerry Blog; if you like this kind music, check it out.Â  After the jump, I’ll put up two of my favorite songs.