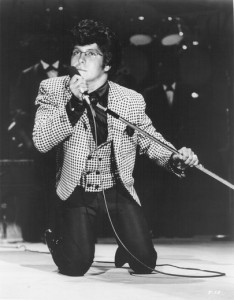 I first heard about the TAMI show (Teen Age Music International) from Little Steven and was really excited when it was finally released on DVD about a month ago. Then I watched it the other night and I can’t recommend it more. It features performance by: Chuck Berry, Gerry & The Pacemakers, Smokey Robinson and The Miracles, The Barbarians, Marvin Gaye, my girl Lesley Gore, The Beach Boys, Billy J. Kramer and The Dakotas, The Supremes, Jan and Dean, James Brown and The Famous Flames and The Rolling Stones. It was recorded in ’64, so everyone involved is pretty young. Also, the sound is really good on all their live performances (no lip syncs, overdubs or backing tracks). In fact the house band is the famous Wrecking Crew, the session musicians that play on almost everything that came out of California in the 60’s. Terri Garr is a Go-Go dancer in the background and… sorry, I just really like this movie.

In other large music gatherings (and to make this post even longer), Lollapalooza finally announced their schedule and are selling single day passes. For once they put all the bands that I would pay to see on one day, Friday. Kevin has already mentioned that he will go on “whatever day the Strokes play;” who else is in?

Ps. Kevin/Mike, you are both better wordsmiths than me. Can we try to win this Strokes Stageside contest? It starts today!