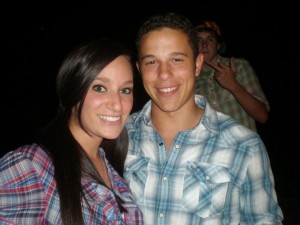 So I know neither of the people in the foreground. But thus is the art of the photobomb. I daresay Joan may even be proud of this.

Yesterday was my first dose of NFL RedZone, where you are cut to every game that has a team in the redzone, is threatening, just scored, on a 2 minute drive, etc. Ideally, you see every touchdown from every game, even if its split screen. Oh yeah, and without commericals. Like NPR for meatheads. Needless to say, I was a zombie yesterday. The best is when there’s a lull of like 3-4 minutes, they put on a montage of every touchdown thus far that day; I think thats the video on the home page of the link above.

This, however, did not help my fantasy team, the Bitch Hunters, which is now 0-5-0 with Joseph Addai out. But, my buddy Brock did show me KissingSuzyKolber.com. Its a blog dedicated to the NFL. And however dorky that sounds, or he sounds in his posts, just remember what website you are reading this on. He really hates Chicago quarterbacks, be it his joy in Cutler\’s sacks, or these hilarious commentaries from the Sex Cannon, Rex Grossman.

The dude also loves memes, a word i just found the definition for on Google Dictionary. Cigar Guy is my absolute favorite. There’s this cool picture where Tiger hits the cameraman at the Ryder Cup. Neat, but the guy with headdress and cigar is hard to un-notice after someone telling you. So, the internet gave him the Neil treatment. and may I go so far as to request Neil in the same get-up?

Hulu said I’d like this new cast member on SNL’s Denzel impersonation. They were right. Jay Pharoah is apparently pretty damn good. Â But I gotta start gettin to class. We learn how champagne is made today in Hort!