Can’t say whether I agree or not with this video’s statement that Celine Dion is fucking amazing, but I must say that her stock has risen in my book. The author of the video has more of the argumentÂ here, but I still can’t wrap my head around how someone who didn’t like Celine Dion in the first place would study and disect a two-disc dvd from her in order to make this video. Â Though I am glad he did, its pretty funny.Â 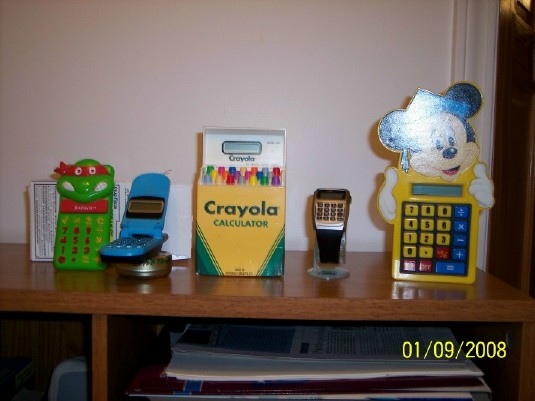 Due to my procrastination, I discovered tonight that I have to take a math placement test by tomorrow. As appalled as I am, the folks at community college might have a point because I haven’t taken a real math class since junior year of high school, 7 years ago. I came home from work with genuine intentions of studying, but first I needed to round up a calculator. I asked everyone and searched the house, and really this is all that my family could come up with: Raphael, a fake cell phone, crayons, a watch, or Mickey — quite the selection and not a real one in the bunch. I think it’s safe to say that the love for novelty items has spiraled out of control here when they have replaced even the most basic household tools and have taken over as standards in our home. I hope you all enjoy a glimpse of the craziness. Tomorrow I will be sporting Raphael, as he is the only one with a square root button.

PS Doesn’t it seem stupid that they would even make a Raphael calculator when clearly out of all the Teenage Mutant Ninja Turtles Donatello loved technology and machines the most? Amateurs.

Yeah, that pretty much tells it like it is. In fact, I find the title funnier than the website — anyway, enjoy from Tom.

Who hasn’t fallen asleep on the train. The Sleep Urbanite is a website that features the pictures taken by a Chicago artist of people asleep on the train. Neat little website, I was just worried that I might find one of myself with my mouth wide open and drool falling from it. I found it from a cool site called NetCot.org. NetCot.org also had a link to this Flickr album of another artist that coping with the urban atmosphere. It features advertisements with the heads removed. Whatever is used to cover the head makes it look like it was decapitated. I did not see Bee Movie, but I think that bee deserved to get decapitated. 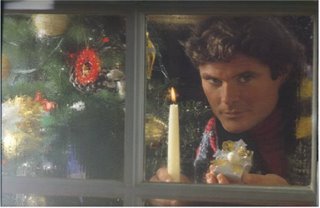 Is Hasselhoff the new Chuck Norris? Â The picture is from a mass email, so I don’t know who to give credit for finding it, but haunts my dreams. Â I never could have thought that I might be raped by Mitch Buchannon or Michael Knight, but now I am not so sure. Â And if that isn’t creepy enough, there is a blog that found two Christmas songs song by the Hoff from an import holiday cd. Check them out at your own discretionÂ here.