ok, this activity will take you less than one minute, but will entertain you for exponentially longer…

Ms. Bliss Would Be Disappointed In Me

Â Â I used to watch Saved by the Bell religiously on saturdays. Â I watched when they were in their college years, when they were on summer vacation, and the made for tv movies when they went to Hawaii and Las Vegas. Â I even watched California Dreams which was always on right after. Â I tried to watchÂ Hang Time, but lets face it, no one liked that showÂ (except for Kelly). Â So when I saw this quiz onÂ Mental Floss, I thought I had it in the bag. Â Wrong. Â I was so wrong that I only got a 53% or so. Pretty tough; I think only my roommate could do really good at this quiz. Â But then again, so could I if I watched it every morning on TBS.

In 98, my boombox was blasting Van Halen and Led Zeppelin. Â I hadn’t heard that much of it before, so classic rock was basically new music to me. Â I didn’t get much into new bands till college. Â StereogumÂ has a post about the ten year anniversary of Neutral Milk Hotel’s Airplane Over the Sea. Â I was probably too busy deciding if I was more partial to David Lee Roth or Sammy Hagar in Van Halen, so I never listened to Neutral Milk Hotel and I missed out on the nostalgia part. Â Apparently, it is a definitive album of the nineties; a lot of people talk about it like they would talk about Weezer’s Blue Album or Radiohead’s OK Computer. Â Anyways, check it out on Hype Machine.

If you thought the Rihanna Umbrella was ridiculous, then get ready for the Tiddy Bear. Pop Candy hasÂ a post about this weird item and Ellen DeGeneres’ fascination with it.Â  This has to have been designed for owners of VW bugs that customized everything but their seat belt.

Now that its raining more than eva… 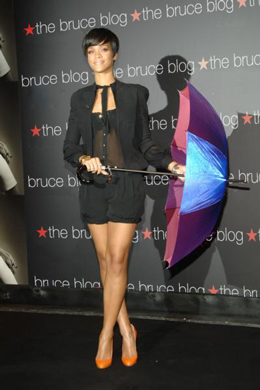 Â I didn’t know that she already aÂ line of umbrellasÂ out, butÂ DlistedÂ has a post about Rihanna releasing her second series of umbrellas through Macys. Â  Jazzy umbrellas, but they had better be for twenty and thirty bucks a pop. Â  I wonder if they break as fast as all the other ones that have been in the Travers house. Â Its a lot of money for an umbrella, but a good bet that Ellen-ellen-ellen would love a umbrella- ella-ella to go with her Rihanna ringtone. Â